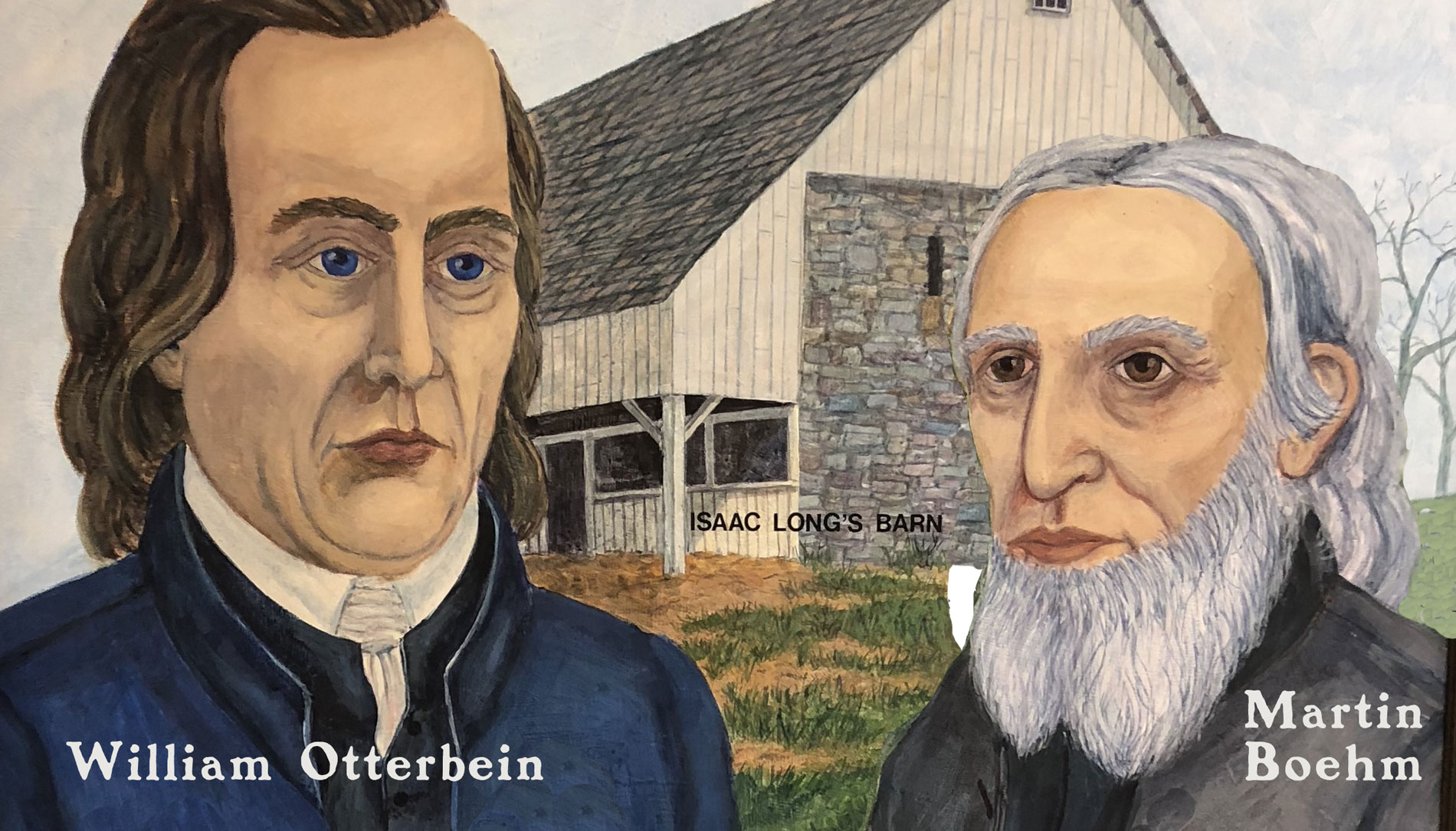 The Story of Boehm and Otterbein

In 1967, people from across the denomination met in Lancaster, Pa., to celebrate the 200th anniversary of the United Brethren church. A gathering was held in Long’s Barn, where it all began with an embrace between William Otterbein and Martin Boehm. Those men, our founding fathers, hadn’t met until that day in 1767.

The anniversary 200 years later included a re-enactment of that embrace. A young UB pastor in Pennsylvania named Ray A. Seilhamer, who went on to serve as bishop 1993-2001, played the part of Martin Boehm. Raymond Waldfogel, an Ohio pastor who would serve as a bishop 1969-1981, took the part of William Otterbein. It was good casting.

On September 25, 2000, we celebrated another 200th anniversary. On that date in 1800, a group of ministers met in Frederick, Maryland, and took two significant actions: they elected the first bishops (Otterbein and Boehm), and they chose a name for the movement which had spread through Pennsylvania, Maryland, and Virginia for 33 years. They called it the Church of the United Brethren in Christ. 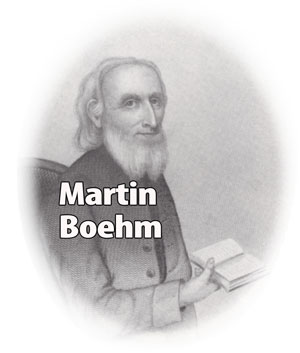 “As the head of a family, a father, a neighbor, a friend, a companion, the prominent feature of his character was goodness; you felt that he was good. His mind was strong, and well stored with the learning necessary for one whose aim is to preach Christ with apostolic zeal and simplicity.” –Francis Asbury, speaking about Martin Boehm

Martin Boehm was born in 1725 just south of Lancaster, Pa. He was the son of a Dutchman, and the grandson of a Swiss who had become a Mennonite while working in Germany (did you get all of that?). He married a Swiss immigrant, Eve. Four of their children died as children. The only surviving child, Henry, spent 64 years as a Methodist minister, part of it as a traveling companion of famed Methodist bishop Francis Asbury, and died six months after turning 100.

Martin Boehm became a minister in 1756 at the Mennonite church in Byerland, Pa. But it wasn’t the usual path to the ministry. In those days, when a church needed a new pastor, persons from the congregation were nominated for the position, and each nominee selected one of the Bibles standing before them. Only one Bible contained a slip of paper with Proverbs 16:33 written on it: “The lot is cast into the lap, but the whole disposing thereof is of the Lord.” Boehm chose that Bible, and presto!, he was a pastor.

Boehm lacked confidence in his preaching skills. Indeed, it was written that he would “stammer out a few words and then be obligated to sit down in shame and remorse.” He agonized over this for months, and after much prayer, came to the realization that he wasn’t even, truly, a Christian. One day as he plowed his fields, he knelt at the end of each row to pray, and the word “Lost, lost” continually hovered over him. Finally, halfway through the row, he broke. Falling to his knees, he cried out, “Lord save, I am lost!” The verse immediately came to him, “I am come to seek and to save that which is lost.”

Boehm wrote, “In a moment, a stream of joy was poured over me. I praised the Lord and left the field.”

And from that day, preaching became a joy—a passion—and he zealously spread the message of salvation to which he had been oblivious for so long. He wrote, “This caused considerable commotion in our church, as well as among the people generally. It was all new.” Lives were transformed. The Great Awakening had come to the Mennonites.

Five years later, when the Mennonite bishop died, Boehm was chosen—again, by lot—as the new bishop. At age 36. In that role, he participated in Great Meetings, as they were called—three-day events attended by several hundred people, sometimes held in barns, in orchards, or outside. Whole communities would find the Holy Spirit descending in power and changing everything.

The Great Meeting we know most about occurred on May 10, 1767, at Long’s Barn in Lancaster, Pa. Bishop Boehm spoke in the barn while some of his Mennonite pastors preached in the orchard outside. Boehm told of his plow-side conversion. As the sermon ended, a Reformed minister named William Otterbein rose from his seat, hugged Boehm, and declared, “We are brethren.” Our denomination’s name is based on Otterbein’s impromptu words. 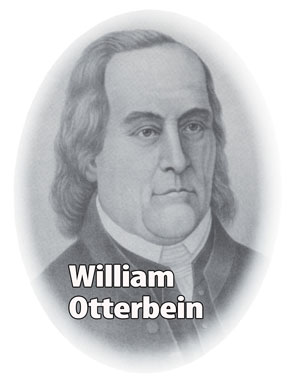 William Otterbein, the son and grandson of ministers, was born in Germany in 1726 (a twin sister died in infancy). Unlike the humble Boehm, Otterbein was highly gifted from Day One, and everyone knew it. He became a good pastor and a powerful preacher. But his boldness didn’t always set well with people, causing his mother to remark, “My William will have to be a missionary, he is so frank, so open, so natural, so prophet like.”

Missionary to where? Well, to Pennsylvania.

Otterbein and five other young ministers volunteered to go to America with a Reformed minister who had just returned from there. Upon learning of her son’s plans, William’s mother held his hand close to her and said, “On earth I may not see thy face again—but go.” (As it turned out, they did see each other again, 20 years later, when Otterbein made his only return visit to Germany.)

The ministers went to Holland, where they underwent examinations regarding their theology, education, personal qualifications, and preaching ability. Then, on April 15, 1752, they began the four-month voyage to New York City.

Otterbein accepted a church in Lancaster, Pa., the most important settlement in Pennsylvania next to Philadelphia. The town had 500 homes and 2000 people. He healed the divisions caused by previous pastors and developed a strong congregation.

From 1758-1760, Otterbein pastored a church in Tulpehocken, near present-day Myerstown. There, he focused heavily on evangelism and the need for an intimate walk with God. He found opportunities to preach during the week and helped guide people to a deeper level of spirituality.

In 1760, Otterbein accepted a call to the frontier town of Frederick, Maryland, and in 1765 he began a nine-year stay at the Reformed church in York, one of the most prominent cities in Pennsylvania.

Then came that meeting at Long’s Barn. Upon hearing Boehm’s testimony, Otterbein recognized a kindred spirit—a person who had come to the same conclusions about God’s ability to transform a life, and about the need for an intimate daily relationship with Christ.

The tall, highly-educated, articulate Otterbein couldn’t contain himself. He had to grasp this simple Mennonite farmer and let everyone know, “This man and I believe the same things. We are brothers.”

It was the beginning of a lifelong friendship, and of a movement within the larger Great Awakening movement.

Both Boehm and Otterbein were widely known in their day (Otterbein assisted in the ordination of Francis Asbury), and their charisma, example, and leadership drew many people to them and to the inter-denominational revival movement they passionately promoted. A group of German-speaking ministers met regularly to encourage each other in their revival and evangelistic efforts.

From 1774-1813, Otterbein pastored the Howard’s End Reformed church in Baltimore, Md. Both Otterbein and the congregation maintained a somewhat rocky relationship with the denomination. Part of it was due to Otterbein’s involvement in the independent revival movement.

Likewise, Boehm’s evangelistic fervor and his associations with Christians from other denominations disturbed his fellow Mennonites. A group of Mennonite leaders confronted Boehm, asking that he repent and turn from his ways. He refused. After a second confrontation and refusal, in 1775, Boehm was excommunicated. His transgressions, as recorded in the excommunication document, included associating with outsiders, especially persons who approved of the practice of war; preaching that the Bible could be burned without harming the church of God; and leading people astray by teaching that Mennonites placed too much emphasis on the ordinances.

Boehm and Otterbein continued their participation in Great Meetings. The also provided supervision and instruction—mentoring, if you will—for pastors from various denominations who rallied around the emphases on evangelism and an intimate walk with God.

A common belief united these people—that when you gave your life to Christ, he radically transformed you into a new person. Many men, upon being converted, left everything and became ministers, telling others about how Christ could transform their lives, too. These ministers traveled around, often on horseback, overseeing perhaps a couple dozen widely scattered groups of believers. And Otterbein and Boehm were the glue holding them together.

It is said that Otterbein would tell new converts, “I ask you not to leave your church. I only ask you to forsake your sins.” However, converts often met for fellowship and teaching, united by bonds which crossed church barriers. A “denomination” was taking shape. It just took them a while to realize it.

The movement spread rapidly among German-speaking people in Pennsylvania, Maryland, and Virginia. And it eventually reached the point where greater organization was required. That need was addressed in September of 1800, when 13 ministers gathered at the home of Peter Kemp in Frederick, Md.

At that simple meeting, the ministers decided to elect bishops to officially lead the movement, and they chose a name: the Church of the United Brethren in Christ.

Up to that point, the movement and its followers had been known in various ways—the Liberty People, the New Reformed, Boehm’s Follower’s, the Unsectarian, the New Mennonites, the United Brotherhood in Christ Jesus, and other names.

The whole thing was still a bit vague. Otterbein remained a member of the Reformed church and pastored a Reformed church in Baltimore. And Boehm, the excommunicated Mennonite bishop, in 1802 joined the Methodist Church—though still a United Brethren bishop. As the years passed, and with each annual meeting of the ministers, the movement took on more structure, more organization, more decently-and-in-order qualities.

Boehm and Otterbein served as bishops until their deaths. Boehm died in 1812, Otterbein in 1813, both at age 87. Bishop Francis Asbury of the Methodist Church spoke at the memorial services of both of these men, the original bishops–the pioneers–of the Church of the United Brethren in Christ.